The Return of the Attar Project

You may have noticed that since the release of The Road Ahead, and a few launch concerts in the Toronto area, the Attar Project has unfortunately been somewhat quiet. Parmela (Attariwala; violinist) was completing work on her PhD, and so had limited time available for performing. Now that she has completed her PhD (congrats!), we're back in action! Last Wednesday, we performed a concert of Canadian works for violin and tabla at the Espace Cercle Carré in Old Montreal.
First on the program was Paul Frehner's Oracle, composed for violin with congas and bongos, which I'm not sure the piece has actually ever been played on! When I first heard the piece premiered by violinist Nadia Francavilla, with D'Arcy Gray on percussion, D'Arcy played the piece on frame drum. That's what gave me the idea that the piece might work well on tabla, and it does! It's a high energy, technically difficult piece (especially the violin part), which works really nicely as an overture of sorts.
Next was Meiro Stamm's The Melody of Rhythm. This piece combines aspects of Mozart's style, with North Indian tabla drumming vocabulary. Yes; Mozart and tabla! The multi-movement work presents variations on the principal theme, through varying time signatures - 2, 3, 5, and 7. We then followed this with Nicole Rampersaud's The Road Ahead... which is principally improvised, via conceptual instructions and fixed structure with certain melodic and harmonic motives being specified by the composer. 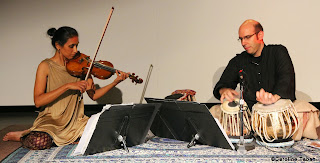 We ended the first half with Christien Ledroit's Never the Twain Shall Meet, for violin, tabla, and fixed media (pre-recorded electronics). The composer's alter-ego as a punk guitarist is certainly evident in this piece, as kaida-palta in Jhaptaal are accompanied by distorted guitars and other processed sounds. A nice way to end the first half with a bang! Coincidentally, all the pieces in the first part appear on our CD, The Road Ahead.
Parmela opened the second half with her solo dance piece, Frank, in which she dances while playing the violin, accompanied by a very subtle, eerie backing track of bowed temple bowls and crotales. Her movements are slow and deliberate, swaying back and forth like a blade of grass. 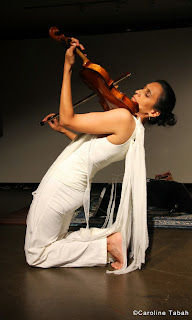 I then followed with a short tabla solo in Teentaal, perhaps around 10 minutes long. I opened with uthaan, and played a famous Benarsi bant through subdivisions of 4-5-6-7-8, and then into a rela. I concluded with a few of my favourite tukras. I'm definitely looking forward to playing a more extended solo, hopefully some time soon!
We ended the concert with the now classic LA, by Robert Rosen. Fortunately for us, Robert now lives in Ottawa, and so was able to attend the concert. It's always a pleasure to have one of the composers in the audience, and especially one so enthusiastic about our performance of his music!
Looking forward to the next concert!
Thanks to Caroline for the photos!